Since the late 1980s, artists had been moving into the Tremont neighborhood from other areas of Cleveland, including the Bradley Building in the Warehouse District and other formerly empty downtown buildings. An arts renaissance was emerging.

Ron Naso opened Studio Gallery on Professor Avenue and, along with Robert Ritchie, held occasional Open Studio days for artists to make their workspaces open to the general public.

This April 1993 ArtWalk card was designed by Stephanie R. Haynes, a CIA grad and Tremont resident in the late 1980′s and early 1990′s.

Work by Raymond Scott Bogelski, his paintings were on display at Wildflower which was located ay 2337 West 11th Street, in Lemko Hall.

Naso and Ritchie teamed up with Sandy Rotokowski of Edison’s Pub and The Literary Cafe’s Andy Timithy and Linda Baldizzi for a multi-venue Halloween art celebration. The seeds of something like “ArtWalk” were being sown.

Two months later, December 1992, the same team marked the opening of Wildflower, an exhibit and performance space in Lemko Hall. To celebrate, The Lit exhibited paintings by Tim Herron, another Tremont resident and proprietor of The Manly Pad. Herron customarily left his sketchpad at the end of the bar at The Lit, to be reviewed and even added to by others; echoes of this custom continue today in the monthly drawing club that meets on Friday nights in the back room           of  The Literary Cafe with the Friday night Tremont Pretentious Artists Drawing Club.

The first Tremont ArtWalk occurred on February 12, 1993–the second Friday of the month. Seven businesses pooled their resources to promote the event, with a card designed by Mikel Mahoney that included the ArtWalk logo and a neighborhood map. These seven businesses included not only two exhibitional galleries but also Bookworm and Bugjuice (a bookstore on Kenilworth Avenue) and The Guerilla Theater.

From these humble beginnings 20 years ago, Tremont Artwalk has blossomed, now boasting monthly participation from almost 30 restaurants, pubs, galleries, museums, churches, social clubs, boutiques and specialty merchants. With the help of Tremont West Development Corporation, the neighborhood also hosts annual summer festivals including July’s Taste of Tremont, the August Arts in the Park Festival, and the crown jewel at summer’s end to usher in the fall art season, the Tremont Arts and Cultural Festival. 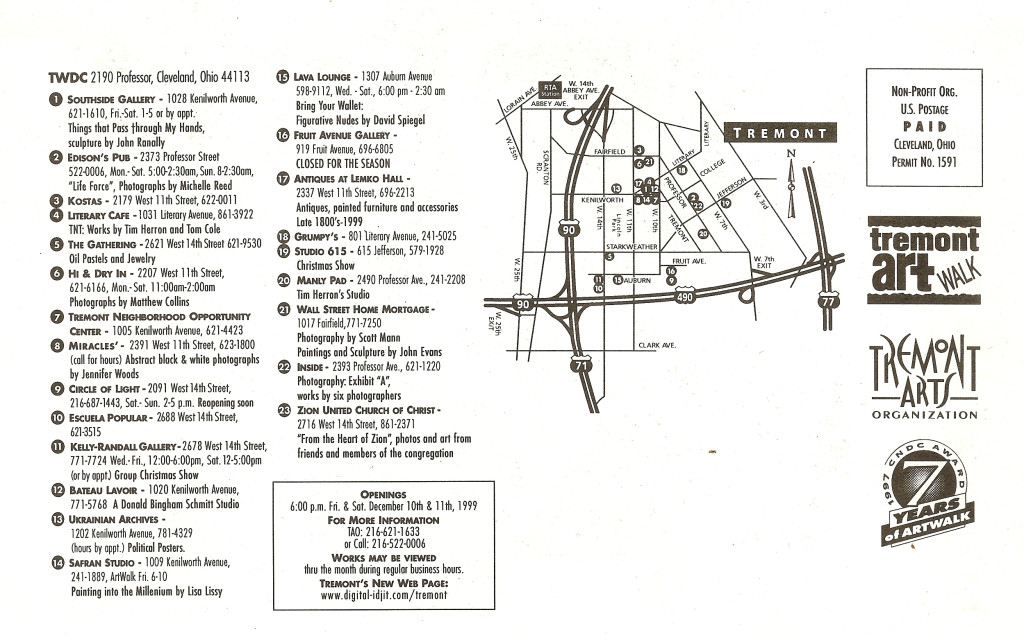 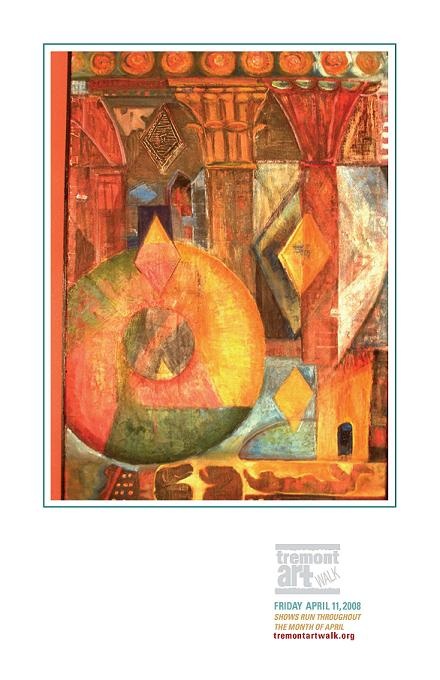 Much of this activity would be hard to imagine without the tireless energy and creativity of local artists who, for over twenty years, have made Tremont ArtWalk the premier monthly event in Cleveland’s original arts neighborhood.

Thanks to all who have been a part of and continue to be a part of Tremont ArtWalk.

Find more information on past ArtWalks here or check back another time as this site under construction and is being updated from time to time.